The lesson we can take from Anuradha Koirala’s life history is that a person can be so capable that they can fulfill their goals as well as help others fulfill their dreams. As for Koirala, she fought, she struggled, and most importantly she helped hundreds of girls.

Every individual dreams of having a better life. This dream might be true for some people but not always true for people living in rural parts of the country with poverty and illiteracy being beyond salvation in some cases.

During this situation, if any individual advocates for providing a better lifestyle and an awesome job, anyone would’ve followed that person. That’s the exact of what has been happening in most parts of Nepal where girls and women of any age are lured to provide a better lifestyle. In most cases, these people initially gain the trust of girls, or villagers, which make them a prone suspect to get trafficked.

Poverty, loss of guardian, high illiteracy ratio, gender discrimination, rapid urbanization, and false belief among the vulnerable minds are some of the key determinants of trafficking. This lucrative business is causing a lot of girls to be involved in sexual exploitation. Most of them are sold to India and even to the Middle East.

Many reports suggest that trafficked girls and women are forced to maintain physical relations with 20-60 men per day followed by verbal abuse. In most cases, they were beaten up with wires, rods, and hot spoons. In a nutshell, they have a miserable life to live, indefinitely.

This act has been continuing in Nepal for a long time, even today 1.5 million Nepalis are at the risk of human trafficking according to a report by country’s human right commission.

Who is Anuradha Koirala?

Anuradha Koirala is the founder of Maiti Nepal which she founded for girls who suffer from human trafficking in Nepal. She herself was a victim of domestic violence. Later she couldn’t tolerate this inhuman activity happening to Nepalese women including herself. That’s the reason she founded Maiti Nepal in 1993 to advocate against human trafficking and protect women of Nepal. 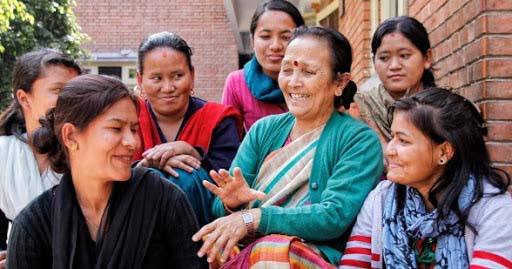 What does Anuradha Koirala do?

Anuradha Koirala established Maiti Nepal which she initially started with a very low investment from her own salary. Koirala started by rescuing 8 domestic victims and paved their path of entrepreneurship by teaching them to run their own shop.

Slowly and steadily the organization grew since Koirala was involved in rescuing many girls, her work started getting noticed. She was able to rescue girls, women victims of domestic violence and trafficking,  eventually, Maiti Nepal got support from everywhere and was backed by UNICEF.

These trafficked girls and women were still humiliated after being rescued and in most cases, they were abandoned by their families and relatives. Maiti-Nepal which means “Mother’s Home” in Nepal is able to provide shelter for those who have nowhere else to go. Anuradha is fond of children, it won’t be wrong to say that she has been quite successful to become a mother to so many children.

As rescued women have difficulty to start a normal life due to the traumatic experiences. Maiti Nepal largely works for the post-rescue phase where most of the victims are provided with medical treatment, emotional intelligence, psychological counseling sessions, rehabilitation programs, legal literacy, and criminal prosecution to stand against the culprit.

Even though Maiti Nepal started with a motive of providing a home to the rescued victims since they were no longer accepted in society. Today Maiti Nepal has three prevention homes, eleven transit homes, a formal school, and two hospices.

The organization has been able to stop human trafficking at an enormous rate. According to the official website of Maiti Nepal, under her leadership, it has been able to support about 40,000 children, girls, and women since its establishment.

Koirala married at a very young age. She married someone outside of her caste and against the support of her family when she was 19 years old. She had a very abusive relationship with her husband, had three miscarriages which she doubts is caused by excessive beating. There’s always a limit to everything, likewise, her marriage ended into a divorce. This divorce came as a turning point in her life as her life’s purpose and responsibility completely changed.

Where was Anuradha Koirala born?

Anuradha Koirala was born and raised in the hill station of Kalimpong, India. She was born on 14th April 1949 as a beloved daughter of Laxmi Gurung and Colonel Pratap Singh.  She completed her education through St. Joseph Convent School. Although she was born in India, she spent most of her life in Nepal.

Her contribution to eradicating trafficking is truly inspiring, Anuradha Koirala has been awarded with many national and international awards, 38 to date, and still counting.

Some of the notable awards won by Anuradha Koirala includes,

Apart from this, she won CNN Hero of the Year award in 2010, which is a pride and honor to the nation itself whereby she received USD 100,000 to continue her work with Maiti Nepal, in addition to USD 25,000 as a token of appreciation from CNN.

Anuradha adored Mother Teresa, it might be surprising to know that she received Mother Teresa Awards in 2014. She was awarded Padma Shri, which is India’s fourth-highest civilian award.

Anuradha Koirala, a voice of trafficked girls and women is truly the largest source of inspiration amongst many in Nepal and perhaps worldwide. She truly believes, “One day we will really stop it, the trafficking will end”.

Everything you need to know about Shrinkhala Khatiwada Miss Nepal 2018