Introduction of the bold and beautiful lady: Hillary Clinton

Hillary Clinton is the first woman to be nominated for the president in the history of the United States of America. She was born on October 26, 1947, in Chicago. She is married to Bill Clinton, ex-president of the USA. She is a politician and an American lawyer. She has also served as the United States senate from 2001 to 2009 and then served as the secretary of state from 2009 to 2013.

Hillary Clinton has also written dozens of books. Her contributions are mainly centered around health care especially of women and children. She has received many awards and recognitions for her major contributions to society. Hillary Clinton was defeated against Donald Trump in the presidential election which was held in 2016.

Where Hillary Clinton was born?

Hillary was born in her family as the eldest child. She was born on October 26, 1947, in Chicago. Tony Rodham and Hugh Rodham are her two younger brothers. Her father was Hugh Rodham who owned a fabric store. Her mother was Dorothy Emma Howell Rodham. Her mother had always been the major source of her inspiration. Hillary Clinton has also mentioned in her 2014 memoir, Hard Choices, “No one had a bigger influence on my life or did more to shape the person I became,” talking about her mother.

Where did Hillary Clinton go to college

Hillary Clinton graduated from Wellesley College. In her college, she was very active in student politics. She was also elected as senior class president in 1969. After Wellesley, she attended Yale Law School. She met Bill Clinton in the same school and fell in love with him. She enrolled at Yale Child Study Center after graduating from Yale. There she took courses on children and medicine.

The love story of Hilary and Bill Clinton: 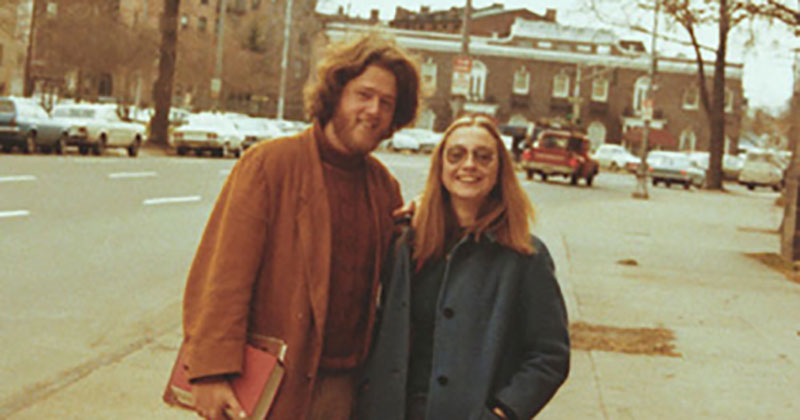 As mentioned earlier, Hilary and Bill met each other at Yale Law school. It was Bill who first fell in love with the bold and beautiful woman. He saw her in the class of politics and civil rights. He has even mentioned “The first time I saw her, we were appropriately enough in a class on political and civil rights. She had thick blonde hair, big glasses, and wore no makeup. And she exuded this sense of strength and self-possession that I found magnetic.”

Bill met Hilary in the library where they finally talked to each other. But Bill remained frozen by shock when Hilary caught him staring at her and she came straight up to him and asked his name. They shared a few words that day. They gradually started talking and sharing. He was highly attracted by her personality. Hilary too was loving and caring. The couple really has a cute love story. They gradually became best friends and started dating each other after sometimes.

Bill was rejected already two times by Hilary before she finally accepted his proposal of marriage. But he always says that it was worth the wait. This couple finally got married on October 11, 1975, in a private ceremony which included very few and close members. However, they threw a grand reception afterward. They are even taken as a political power couple. They now have a daughter, Chelsea Clinton, and share a small and happy family.

Hillary’s career had already started when he was just a student. She would do summer jobs as a college student. Afetr graduation she came to Washington D.C. She got a job on U.S. Senator Walter Mondale’s sub-committee migrant workers. After that she in 1972, she worked for the western states for the campaign of Democratic presidential nominee Mr.George McGovern.

In 1974, during the Watergate Scandal, Hillary became a member of the presidential impeachment inquiry staff, advising the Judiciary Committee of the House of Representatives. After the resign of Mr. Richard M. Nixon, Hillary was appointed a faculty member of University of Arkansas Law School in Fayetteville where she was together with Boyfriend Bill Clinton as he was a teacher there.

After the marriage of Hillary and Bill Clinton, in 1976 Bill was elected as attorney general. In 1977, Hillary was working at the Legal Services Corporation by President Carter as a Part-time chairman. After many years in the state, Hillary co-founded Arkansas Advocates for Children and Families to serve the children.

Considering her actions Hillary Clinton was named one of the 100 most powerful lawyers in America by The National Law Journal.

Hillary worked at various places during and after college. The following points summarize her career.

Hilary has written dozens of books. They are mentioned below:

20 Encouraging Kamala Harris quotes that will motivate you

Ruth Bader Ginsburg supreme court justice who stood up for equality in society.

Everything you need to know about Greta Thunberg disease, bio, environmentalist and more

From being a Bartender to being the youngest Congress Woman: Know more about Alexandria Ocasio-Cortez election