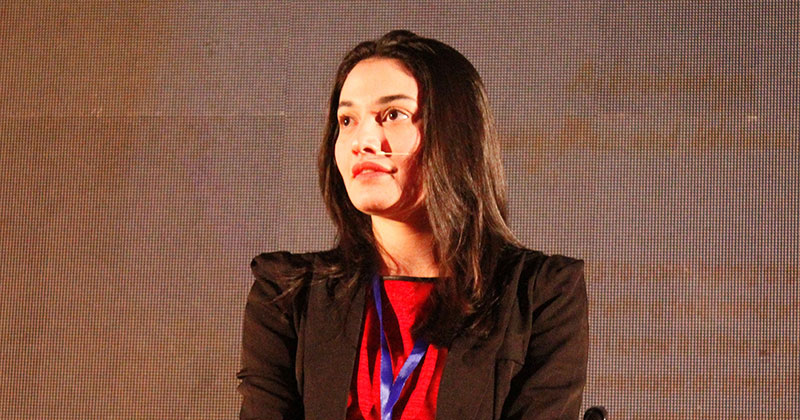 Muniba Mazari the inspiring iron lady of Pakistan is a Pakistani activist, artist, motivational speaker, singer, and model. Despite having to move around using a wheelchair, she has given countless speeches in front of thousands of people and motivated them. She began standing up for herself after a tragic accident that flipped her life upside down. The accident left her with lower half body paralysis but it also made her realize the inner strength she had hidden inside of her.

Being a differently-abled person after the accident, Mazari has inspired and motivated thousands of people. In her speeches, she shares her story and tells everyone to believe in themselves. She first started this journey with herself. At present, Mazari is Pakistan’s first wheelchair user model. Additionally, she achieved the role of national ambassador for UN Women Pakistan. The accident may have destroyed her physically but it strengthened her mentally.

Muniba Mazari life history was like any other Pakistani girl. Mazari was born on 3 March 1987 in Balochistan, Pakistan. She was raised in Rahim Yar Khan, Pakistan with her two younger brothers, Zulfiqar Ali Mazari and Sarfraz Mazari. Her life was very much ordinary as she attended the Army Public School and later went to college in her own hometown. She graduated in Fine Arts and is fluent in the Pakistan and English language.

As soon as she graduated, Muniba Mazari was married to husband Khurram Shahzad, a former Pakistan Air Force pilot. She wanted to study more as she was just 18 at the time, but her traditions limited her from studying. After the marriage, Mazari couldn’t continue her studies and carried on being a housewife.

After 3 years of her marriage in 2008, while Mazari and her husband were traveling in their car, they met in a tragic car accident. Her husband escaped safely but she was left in the place of the accident with a serious injury that left her paraplegic. After the accident, she had to be in a wheelchair to move around. Due to her disability, Mazari and her husband separated in 2014 and then divorced in 2015.

After 3 years of their marriage, in 2008 Muniba Mazari and her husband Khurram Shahzad set on a trip from Quetta to Rahim Yar Khan. While traveling, her husband who was driving at that time fell asleep and the car crashed into a ditch in the road. Her husband quickly jumped out of the car but Mazari was stuck inside the car and sustained several injuries.

Unfortunately, Muniba Mazari had several injuries, she broke her arm, shoulder blade, rib-cage, collarbone, and most importantly her spine which left her with lower-body paralysis. After this traumatic incident, Mazari couldn’t bear a child for the rest of her life.

It took her a total of 2 years of bed rest to recover from the damage sustained by the accident. Slowly but steadily her condition began to improve and she started using a wheelchair to move around. Along her side stood her mother who moved in with her to help her recover. However, her husband was nowhere to be seen in the time of need but instead filed a divorce in 2015. Four years after her accident,  MunibaMazari adopted a son from an orphanage named Neal.

Even though Muniba Mazari is talented in multiple fields like an activist, motivational speaking, model, singer, etc her career is mostly built on motivational speaking. Her actual career started after the trauma she went through during her accident period. After her recovery, she started working for Areeb Azhar then she joined her son’s school for a project “Dheeray Bolo” teaching Urdu in schools.

Apart from that, Mazari participated in various events as a motivational speaker and shared her life story. She appeared in various conferences and forums. Her greatest breakthrough was from TEDx Islamabad. Muniba Mazari had a breakthrough in her career after her hit speech in TED talk.

She was also featured in Young Presidents Organization, Global Leadership Conference, Vcon Dubai 2017 as a speaker. From TED talk, Muniba Mazari’s popularity grew and she was offered to work at PTV as the first-ever wheelchair anchor. In 2015, in the account of her works and accomplishments, Mazari was named inspirational lady by BBC.

Mazari made a name for herself again as she was chosen by Pond’s and Toni & Guy to become their model. This made her the first wheelchair model in Asia. In 2016, as her influences and accomplishments grew, she was also featured in Forbes 30 under 30. Later on, Muniba Mazari was made the National Ambassador for UN Women Pakistan. That is why Muniba Mazari is often summoned and busy in UN-related works. At present, Mazari is Brand Ambassador for RYTHM Foundation and CSR set out toward Chughtai Labs.

Mazari is a lady who doesn’t keep quiet and is always involved in something. While being in bed rest at the hospital after the accident, Muniba Mazari started painting canvas. Her slogan was “Let Your Walls Wear Colours”. She learned the art very quickly and even created her own canvas brand named “Muniba’s Canvas”. Now she has a collection of her work which is presented at exhibitions. She also does canvas work for charity work.

Her records till now

She was titled Inspirational lady by BBC among BBC’s 100 persuasive ladies on the planet. She was National Ambassador for UN Women Pakistan. Mazari won worldwide honor for philanthropic endeavors. She was also awarded the trees Honor Award 2015 by WCCI Lahore Division.

Muniba Mazari is still young and already have achieved a lot of achievements. Her life story, her tale gives us inspiration that even our small steps can lead to something big in the future. Mental strength is way beyond physical strength. Everything starts from us, from our doing.

The most inspiring tale in history: Helen Keller deaf and blind life

Everything you need to know about what happened to Turia Pitt